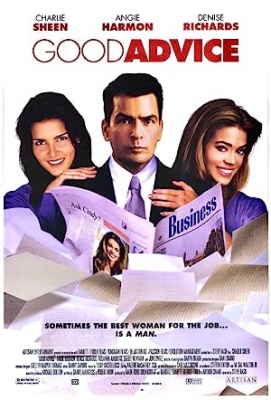 Ryan is a womanizing stockbroker whose unethical business practices cost him his job and his trader's license. Unable to find another job, he is forced to move in with his equally self-involved (and completely oblivious) girlfriend, Cindy, an insensitive advice columnist on the cusp of losing her own job due to her poor advice and slow work habits. Finding that the truth behind his moving in has nothing to do with romance, Cindy runs off with another man. Ryan decides to stay in the apartment and earn a living by doing Cindy's job. Ryan establishes himself with Cindy's editor, Page, as Cindy's go-fer, collecting Cindy's paychecks and mail and delivering "her" columns. Initially as hopelessly inept as Cindy in giving advice, he nearly gets the column canceled. However, he rapidly grows into the job and the combination of forced introspection, research and the growing knowledge that he is touching other people's lives transforms him. The column becomes an amazing success. Ryan finds his initially superficial attraction to Page growing into love, but he cannot reveal his feelings while he is a deceptive fraud. Meanwhile, Cindy becomes aware of "her" growing fame, and returns to cash in, at the same time that the owner of a rival newspaper chain attempts to force Page to sell "Cindy's" column to him.