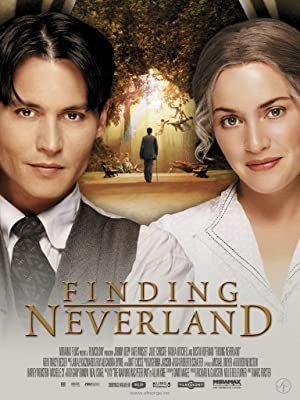 1903 London. Renowned playwright J.M. Barrie (James)'s latest effort has garnered less than positive reviews, something he knew would be the case even before the play's mounting. This failure places pressure on James to write another play quickly as impresario Charles Frohman needs another to replace the failure to keep his theater viable. Out for a walk with his dog in part to let his creative juices flow, James stumbles upon the Llewelyn Davies family: recently widowed Sylvia Llewelyn Davies (the daughter of now deceased author George L. Du Maurier) and her four adolescent sons. James and the family members become friends, largely based on he and the boys being able to foster in each other the imagination of children, James just being the biggest among them in this regard. Sylvia also welcomes James into their lives, he who becomes an important and integral part of it. Among the six of them, the only one who does not want to partake is Sylvia's third, Peter Llewelyn Davies, who is still grieving the reality of their lives, where his father was there one day planning an outing for the family, and gone the next. Two other people who don't appreciate James in the Llewelyn Davies' lives are: his wife, Mary Barrie, who always feels the need to be the responsible one in their relationship and who feels threatened by his friendship with an unmarried woman; and Emma du Maurier, Sylvia's overbearing mother, who sees him as an obstacle to Sylvia moving on with her life with another potential husband, and an impediment to maintaining discipline within the boys. James still hopes to bring Peter out of his self-imposed shell, but in the process comes up with an idea for another play based on an amalgam of himself and Peter, that play which eventually becomes what Charles sees as a largely unmountable and thus doomed production called "Peter Pan". This process of helping Peter could take a step backward when it looks like Sylvia may imminently befall a similar fate to that of h