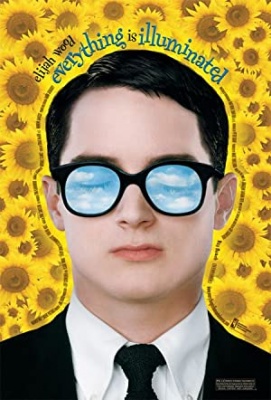 Jewish-American writer Jonathan Safran Foer is a collector of his family's memorabilia, although most of the items, some which he takes without asking, would not be considered keepsakes by the average person. He places most of those items in individual Ziploc bags, and hangs them on his keepsake wall under the photograph of the person to who it is most associated. He has this compulsion in an effort to remember. He is able to tie a photograph that he receives from his grandmother, Sabine Foer, on her deathbed - it of his grandfather, Safran Foer, during the war in the Ukraine, and a young woman he will learn is named Augustine - back to a pendant he stole from his grandfather on his deathbed in 1989, the pendant of a glass encased grasshopper. Learning that Augustine somehow saved his grandfather's life leads to Jonathan going on a quest to find out the story at its source where the photograph was taken, in a now non-existent and probably largely forgotten town called Trachimbrod that was razed by the Nazis during the war, he armed only with his limited knowledge, the pendant, his grandfather's Star of David necklace, the photograph, tip "money", and an old and largely outdated map. Prior to arriving in the Ukraine, Jonathan prearranges the guide services of Odessa-based Heritage Tours, which specializes in helping Jewish expats discover their past. The company is owned and operated by three generations of the Alexander Perchov family, who generally think Jewish people are stupid for wanting to revisit their past, and spend large sums of money for their services in doing so. The three from Heritage assigned to Jonathan's file are: the company founder Alexander I ("Grandpa"), the retired, non-blind blind man who will be the driver; his "seeing eye" dog, Sammy Davis Jr. Jr., a deranged bitch of a dog; and Alexander III ("Alex"), a western pop cultural loving young man, whose broken English will need to suffice for translation. Jonathan will learn that his guides are a