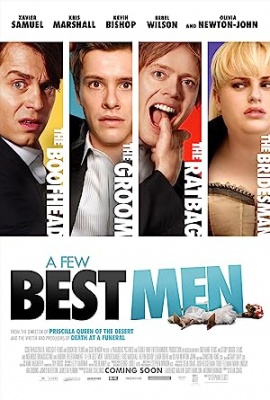 After meeting and spending ten days together while on separate vacations in Tuvalu, twenty-somethings Londoner David Locking and Sydneysider Mia Ramme fall in love and decide to get married, the wedding to take place on the clifftop estate outside of Sydney of Mia's parents, Jim and Barbara Ramme, the former an Australian senator. The plan is for David to move to Australia after the wedding. But first, David, who has been away for six months, has to go home to tell his twenty year best mates Tom, Graham and Luke, who have been his family in the absence of having no blood relatives of his own. The four best friends are to arrive in Sydney the day before the wedding. Each of David's three "best men" have the potential to derail the festivities based on who they are and what they are currently going through in life. Luke is nursing a broken heart as his girlfriend Sarah broke up with him. He is not as much upset about the break-up as he is about the rumor, if true, of a fundamental aspect of her new boyfriend, Chip. Graham is generally unaware of proper social convention and is fixated on his own peccadilloes. And casual Tom, arguably David's best friend, is afraid to tell David that he believes the wedding breaks a fundamental aspect of their friendship. Beyond these issues, others exist on the Australia side of the pond that may add to the mix to cause further problems. Mia wanted them to arrive the day before if only because of the dysfunction within her own family. The most obvious of their problems is manifested by Mia's sister Daphne telling her parents that she is a lesbian solely to irk her by-the-books father, and Jim arguably considering Ramsay his closest family member, Ramsay who he considers the son he never had, Ramsay being the pet sheep. What is to be Jim's surprise wedding present to Mia may add to their family problems. And Ray, a drug dealer who Tom wants to buys some weed from for the stag party, ends up being a fundamental aspect to the boys' stay