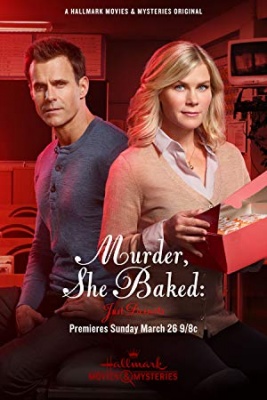 Another homicide has taken place in the small town of Eden Lake, Minnesota, but unlike the recent homicides, the dead bodies in those cases which were all discovered by Hannah Swensen, the owner/operator of the Cookie Jar Bakery and Café, this dead body is discovered by dentist Norman Rhodes outside Eden Lake High School. The victim is Len Bishop, the coach of the school's basketball team, on which Norman volunteers as an assistant coach. He discovers the body shortly after a live airing of the semi-finals of the Eden Lake Bake-Off, conceived, sponsored and hosted by Hannah and filmed at the school by another sponsor, the local television station, WNKW. Len was a last minute replacement as the third judge for the semi-finals in the baking contest. Detective Mike Kingston with the Sheriff's Department leads the investigation as he has with all the other recent homicides. Mike, who Hannah has chosen to date exclusively over Norman, keeps Hannah in the loop as much as he can, knowing now that she is both an asset, and will investigate on her own anyway if he doesn't include her. The leading suspects include: Michele Bishop, Len's wife, as there are known problems in the marriage as Michele suspected him of infidelity; Josh Reynolds, a second string player on the team who was seen destroying property at the school just prior to the murder and who never had the financial means to move to the next level such as the team's star player, Carl Kimball, the son of WNKW station manager Mason Kimball; and any of the three finalists of the baking contest, as some mishap has befallen most of the judges, including Hannah. As the investigation progresses, a few incidents occur that threaten Mike and Hannah's relationship, with Norman, who has outwardly moved on by dating other women, quietly or not so quietly waiting in the wings.