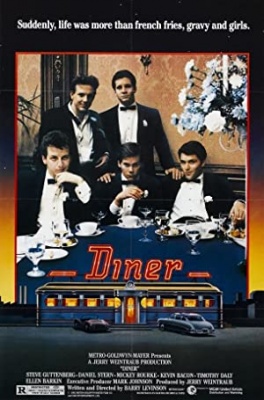 Early twenty-something Baltimoreans Eddie, Shrevie, Boogie, Billy, Fenwick and Modell have been friends since they were kids, where the center of their lives has been and still is the Fells Point Diner. It's the last week of 1959. Baltimore Colts fanatic Eddie is scheduled to get married to Elyse on New Year's Eve, but may call off the wedding if Elyse doesn't pass his Colts quiz which he will hold two days before the scheduled wedding. Inexperienced Eddie turns to the only other married one among the bunch, electronics salesman and music aficionado Shrevie, for advice, he who may not be the best person from who to ask advice on marriage since he doesn't yet realize that he probably got married to his wife Beth for the wrong reasons. Indeed, Beth, who has lost her sense of identity, is unhappy in their marriage, and contemplates having an affair with someone who provides what she believes is a sympathetic shoulder. Hairdresser and law school student Boogie is the player of the bunch, he who has some major financial problems because of his quest for the fast buck. Generally straight laced Billy, Eddie's best man who has been away getting his MBA, has come back to Baltimore a few days early to clarify his relationship with his girlfriend, Barb. Smart-aleck Fen is a college drop out who lives off his trust fund. He doesn't much like his family but likes what their money can afford him. And insecure Modell is afraid to ask for anything directly. As 1960 approaches, they collectively deal with how to be truly adults.