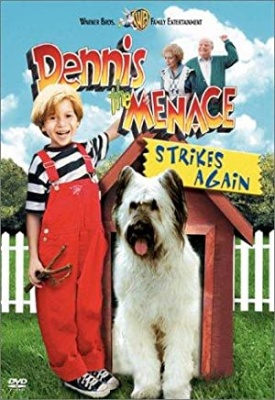 Hey, Mr. Wilson! It's another Dennis the Menace movie! The day starts out fine, it's Mr. Wilson's birthday and guess who shows up uninvited? Dennis and a few of his bug friends. After getting a cake in the face and falling down the stairs in a wagon, Mr. Wilson wishes Dennis had another old man to bother. His prayers are answered when Dennis' grandfather comes over announcing he's gonna move in! So once again all is fine until Mr. Wilson finds out he's getting old and Grandpa can do everything better than Mr.Wilson. One day at an amusement park, Mr. Wilson meets The Professor and his assistant Sylvester who claim to be specialists in making people younger--for a price. It's a scam but Mr. Wilson is to naive to know. Well the first few attempts at decreasing Mr. Wilson's age fail, thanks to Dennis. Mr. Wilson tries to do things better than Grandpa when he follows them to the swimming pool but he fails. But it's young Dennis who catches the swindlers at their own game when Wilson wants to sell his house and Professor and Sylvester show up disguised as plumbers, electricians, realty men, exterminators, and what-have-you and make large holes in Mr. Wilson's house--not to mention his check book, but it's Dennis to the rescue and everyone is happy. Sometime later, Grandpa takes Dennis to the Grand Canyon in Grandpa's motor home. The mistake: The motor home is parked awful close to the canyon and it's wheels are stopped with a rock, which Dennis collects while rock hunting. Back at home, Mr. and Mrs. Wilson watch Grandpa getting rescued from the Grand Canyon and Mr. Wilson proclaims,"He's a menace!"