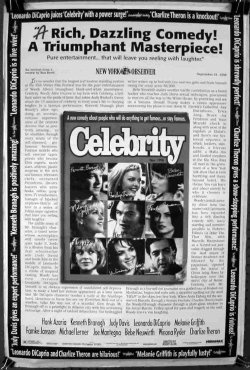 New York City. Forty year old Lee Simon, a critically panned two time novelist who works as a travel writer (a job he hates) to earn a steady living, tells his shocked wife of sixteen years, English teacher Robin Simon, that he wants a divorce. Although he had not been happy with Robin for some time, she who he feels is a bundle of Catholic repressions and neuroses especially when it comes to sex, Lee finally came to the conclusion about wanting a divorce upon attending his high school reunion and seeing a roomful of losers, he believing he turning into one of them if he didn't make a drastic change. He gets a job working as a journalist for an entertainment magazine, while he writes screenplays on the side, he believing the latter a good stepping stone to finishing his third novel if the screenplays works out. The journalist job includes conducting interviews with celebrities, not only to who he can pedal his completed screenplay, but also what he quickly learns to who he has easy access to an abundance of sex with the "beautiful people". Regardless, Lee enters into a relationship with Bonnie, a publishing house story editor who encourages him to complete that novel, which she truly believes will be better than the first two if only due to maturity. Meanwhile, Robin, who is not taking the divorce well, is convalescing at a Catholic retreat before she, with the support of her friends Jan and Cheryl, decides what next to do with her life, she believing that returning to teaching not the answer. During her search, Robin unexpectedly stumbles onto her own connection with celebrity when she meets television producer Tony Gardella, who hires her to be a production assistant with his company. Lee and Robin's resulting stories take them in two different directions, one toward and the other away from the true happiness that was absent from their marriage.