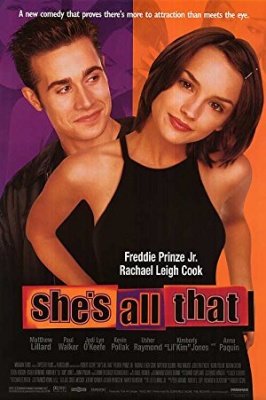 She's All That is your typical high school prom king and queen story and the run in defending the star status in the upcoming election. High school hottie, Zack Siler is dumped by his prom-queen girlfriend, the equally attractive and extremely popular, Taylor Vaughan who fell for a second-hand world reject TV soap star who she met over the spring break. Having been publicly dumped, Zack defends his discomposure by stating that Taylor is all make-up and wonder-bra and he can make any ordinary girl a prom queen with a similar package. His high-school buddy, Dean Sampson, engages him in a bet following this statement and picks the geeky looking Laney Boggs out of the crowd as the girl Zack must transform into the new prom queen. Zack agrees since he has no option, but as time passes and Laney begins to transform, Zack begins to find her attractive. While all that falls beautifully in place, it's not your typical fairy-tale. Throw in Dean Sampson to complicate the situation, as when he first made the bet he never thought that Zack could rise to the challenge but looking at how Laney has transformed, it looks like Zack could be on a winning streak.