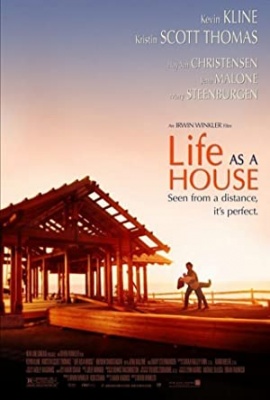 George Monroe is a lonely and sad man. Divorced for ten years, he lives alone on the Southern California coast with his pet dog in the same run down shack he has lived in for twenty-five years, the shack which his father passed down to him. In the intervening years, ostentatious houses have sprung up around him. He's been at the same architectural firm for twenty years in a job he hates, which primarily consists of building scale models. On the day that he is fired from his job, he is diagnosed with an advanced case of terminal cancer, which he chooses not to disclose to his family. In many ways, this day is the happiest of his recent life in that he decides to spend what little time he has left doing what he really wants to do, namely build a house he can call his own to replace the shack. He also wants his rebellious sixteen year old son, Sam Monroe, to live with him for the summer, hopefully not only to help in the house construction, but for the two to reconnect as a family. Getting Sam to do any of it will not be an easy task as Sam, who has embarked on some self-destructive behavior, would rather do anything than spend time with his family, which also includes his mother Robin Kimball, her wealthy but emotionally unaffectionate husband Peter Kimball, and their adolescent children. In Sam, George sees an unhappy person in every aspect of his life, much like George was himself before that fateful day. What Sam decides to do for the summer may consider Alyssa Beck, his pretty classmate and George's next door neighbor. Through the process, George also reconnects with Robin, who admits that she's made some pretty bad decisions in her life. He may not want that reconnection to go too far considering his health. Ultimately George has much to do to complete all he wants before he dies.