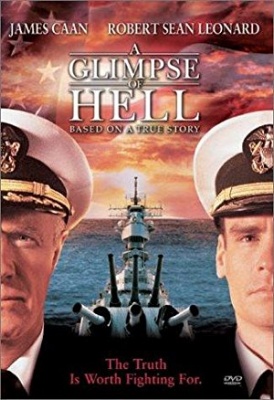 USNavy Ensign (Lieutenant junior grade) Dan Meyer feared a non-flying officer's career prospects -like his- aren't brilliant but tries to excel at his assignment, in charge of gun turret 1 on the battle ship USS Iowa, which sees action in every major war. When the crew tell him the budget never goes to necessary repairs and improvements on the 50 years old ship, he takes his Navy-retired father Donald's advice to file a detailed report above the well-connected captain Fred Moosally's head. When master chief Skelley, the ship's liaison with HQ, asks Meyer to execute artillery experiments which can impress the brass he eagerly accepts against objections from the crewmen, especially Petty Officer Dale Mortensen; the first test successfully sets a record. Alas the second, in turret 2, goes terribly wrong: an explosion destroys the turret and kills 47 sailors, which seals the fate of 16 inch-guns till further notice. Meyer protests in vain when evidence is willfully destroyed 'to spare the families', and fears admiral Langlett, in sole charge of the Navy's official investigation, is covering the captain, who now clearly considers Meyer a traitor snitch. When Gunner's Mate Clayton 'Clay' Hartwig's sister Kathy Kubicina contests his $100,000 Navy life insurance going to Kendall 'Ken' Truitt, who was generally believed Clayton's homosexual lover and hated by some as a petty loan-shark, the official, FBI-aided NIS investigation is conducted on the unproved assumption they were lovers gone sour and the explosion a passionate murder/suicide by Hartwig, implicating innocent Gunner's Mate Tim Sykes, all impossible to accept for Meyer as no detonator was found, yet the admiral's story for the public and the technical facts remain unproven. Shortly after, a Lebanon mission requires test firing to recalibrate the ship's guns and Congress starts its own investigation...