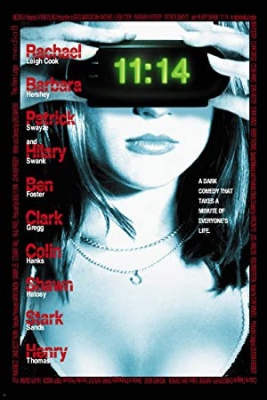 A few incidents that happen at 11:14pm in the town of Middleton are seen from five different perspectives, each of the players who generally works toward self interest, not caring about the consequence to other people, and in the process exacerbating the situations by his or her actions. Jack, in town to meet someone, is a chronic drinker and driver, he still doing so despite having his license temporarily suspended. Teens Mark, Eddie and Tim are out for a joyride in Mark's van, they generally causing havoc all in the name of having fun... that is until something goes wrong. Frank, out for a walk with his dog, stumbles across something which makes him jump to a conclusion about his daughter, to who he is both over-protective and overly trusting. Duffy, who works as a clerk at Lloyd's EZZZ Stop convenience store, goes to the store just as it is closing to ask his friend, the clerk on duty, Buzzy, for a favor, which may be difficult for her to grant based on her own needs. And Cheri is trying to get a few hundred dollars for an abortion from the purported "fathers", while in reality she has another plan in mind. All their actions make for a busy night for the first responders on duty, including Officer Hannagan, and paramedics Leon and Kevin.