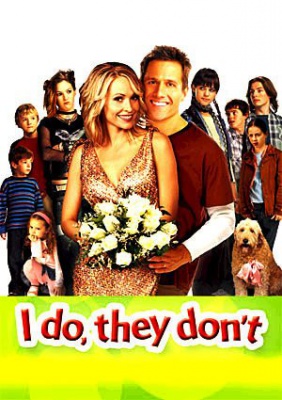 Young widow Carrie Lewellyn has a successful cookies business and four kids: Andrew, Moira, little Nathan and little Daisy. Widower Jim Barber, a furniture maker, also has four: Andrew B, Jef, Lily and Sandy (dating seriously with Rusty), plus a dog, Java. When the two parents, who had been dating for nearly a year, decide rather impulsively to get married on a trip to Las Vegas in a casino's chapel when challenged on stage, without the kids who find out reading the news in the National Interrogator, that results in a chaotically large reconstituted family. The first meeting of all ten is a picnic on neutral grounds, and a disaster at first sight: Andrew L. -who has a dog allergy- and Sandy know and hate each-other. The youngest kids soon decide keeping their parents close still is best- the only place the happy couple can be alone is with the dog in the garage. Andrew B and Moira surprise their parents by kissing each-other. The possibilities for conflicts are endless, and they can coincide too. Jim tries to get the kids to mingle by having everyone take a "hooky day" together, bowling boys-girls, and that's a start, but can it get easy? When they don't fight, the kids try to play the parents against each-other, which even puts their marriage under pressure, as their respective professional problems do...