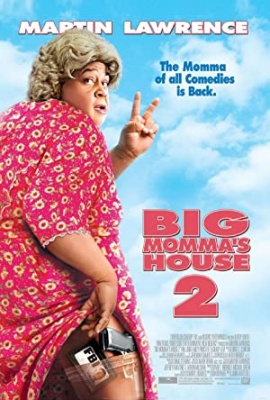 Undercover Agent Malcolm Turner is back and this time he's out to expose the suspected designer of a deadly computer "worm" that would allow outside forces access to sophistical and critical government intelligence files. But unfortunately, the only way the crafty agent can get next to the worm's creator, Tom Fuller, is to access the programmer's Orange County home as the new "nanny" to Fuller and his wife Leah's children: toddler Andrew and his two older sisters, Carrie and Molly. This means that Malcolm must once again rely on his sure-fire alter ego, the take-no-prisoners Hattie Mae Pierce, a.k.a. "Big Momma," to bring down the bad guys and prove that a woman's work is never done! But once undercover, the job proves another tough juggling act for Big Momma as "she" must manage the hectic lives of the three Fuller kids, keep up with their myriad of daily activities, and handle the many household chores, all while secretly trying to dig up information on Tom's computer virus. Of course, Malcolm's hardest and most comical task is staying in Big Momma character throughout, which requires the trickiest of physical and vocal transformations, not to mention the ability to think really fast on his pumps. Hilarious situations ensue for "Big Momma" while trying to trap her prey, including, infiltrating a ritzy women's day spa, leading a bawdy teen cheerleading competition, and surviving a crazy jet ski chase, all while trying to keep "her" wig straight and skirts smooth. Along the way, "Big Momma" also helps bring the fractured Fuller clan back together and, in turn, Malcolm develops a newfound appreciation for his own family, which includes stepson Trent and expectant pregnant wife Sherrie. Malcolm also learns he can strike a successful balance between his work and home responsibilities, without shortchanging either side in the process.