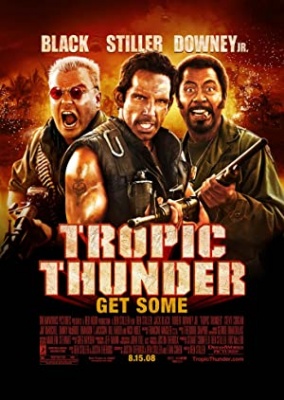 Action movie star Tugg Speedman is on the downslide of his professional career. He wants to be considered a serious actor, but his latest serious role as the title character in "Simple Jack" resulted in negative reviews and ridicule. Comedian Jeff Portnoy is best known for his leading roles in sophomoric comedies, and may be less well known for his rampant drug use. Five time Oscar winner Kirk Lazarus is a serious method actor, who immerses himself in whatever the role. On location in southeast Vietnam, they are the stars of "Tropic Thunder", based on Vietnam war veteran 'Four Leaf' Tayback's memoirs of his rescue during the war, that rescue which was considered a near suicide mission for the assigned army force and resulted in him losing both hands. For his role, Caucasian Australian Lazarus even went through a controversial surgical skin dying procedure so that he could convincingly play a black man. Production is not going well since rookie director Damien Cockburn is unable to control the prima-donna attitude of his three stars. Cockburn and Tayback decide that the five primary actors - Speedman, Portnoy, Lazarus, rapper Alpa Chino, and newcomer Kevin Sandusky - need to work together as a unit as did their real life characters. The five are placed in the middle of the jungle, and with only a map and their prop machine guns in hand, are asked to work together to battle through the stunt pyrotechnics in their way. What none of the seven of them know is that they have been dropped into a real life drug war led by the Flaming Dragons. It isn't until Speedman is captured by the Flaming Dragons and tortured that they all realize that what they believed was make believe gunfire and land mines was actually real life. As the four actors try to figure out what to do concerning Speedman's situation, all five go through their own journey of self-discovery. Meanwhile, the movie's megalomaniacal profanity spewing producer Les Grossman and Speedman's faithful agent Rick Peck a