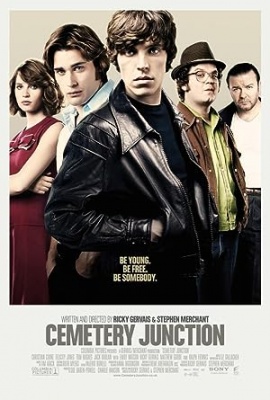 It's 1973 in Cemetery Junction, a Reading suburb. Three working class lads, best friends, are coming of age. Freddie wants to rise above his station, taking a job selling life insurance, wearing a suit and tie. Snork works at the railway station and wants a girlfriend some day. Bruce talks of leaving but seems on track to work at a factory, drink and fight, and become like his dad, in front of the telly with beer on hand; and he's trying the patience of the police officer who gets him out of jams. Freddie's job leads the lads toward a few small changes. He runs across a childhood friend, Julie, his boss's daughter who's engaged to the firm's top seller. Can the lads break out?