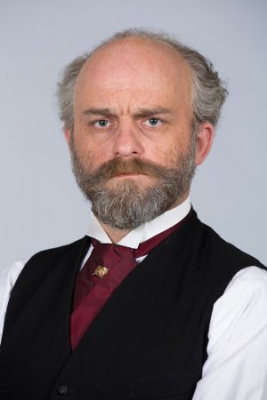 Shortly after the premiere of the New World Symphony in 1894, Antonín Dvorák returns home from America. He's fifty three and famous. He feels his creativity and humbly perceives the God's gift, thanks to which new brilliant ideas pop into his head again and again. But still, he has fear deep inside. In the pocket of his vest is a well-worn letter, which came from Bohemia to America and the existence of which is known only by him - and the other woman. Dvorák's life is godly simple in some aspects, extraordinarily complex in others. Among the latter is the strange triangle of his relationships: two women - his wife Anna and her sister, countess Josefína Kounicová. It cannot be said he married one and loved the other, the relationships between people are more complex than that, but the old tension is still present. They just got used to it and stopped feeling it. Josefína is his muse, the never fulfilled love. A perfect lady, actress and aristocrat. Beautiful, witty and self-confident. Her sister Anna always looked a little like Cinderella in comparison, but despite that it was her who won. She gave nine children and a perfect background to Dvorák. But now he's gotten the letter. Josefína writes she's very ill, and maybe it won't take much longer... So Dvorák does not hesitate. He does not return from America for holidays, it is this anxious question of thirty years of unfulfilled relationship which drives him home. Has he lived mechanically all those years? Only because that's the common way? Shouldn't he, against all conventions, cut all ties and listen to his heart? For the first time, truthfully? And what about the price? All in life comes with a price. Is he really ready to pay for a decision which ruins the godly order of his private universe?