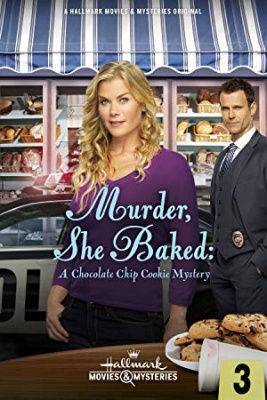 College educated Hannah Swensen owns and operates Hannah's Cookie Jar, a bakery and café, in the small town of Eden Lake, Minnesota, where she grew up and where most everyone knows everyone else. Baking for the community and taking care of her cat are Hannah's primary concerns in life, while finding a husband by making herself more feminine being at the bottom of the list, which irks her widowed mother, Delores Swensen, and all the women in town who know Hannah is a catch if she would only show that side of herself. As such, Hannah does not appreciate Delores ambushing her with Dr. Norman Rhodes, the handsome bachelor dentist just arrived in town, despite admitting to herself that he is charming. Eden Lake is turned upside down when Hannah's childhood friend and the bakery's longtime dairy supplier delivery guy, Ron LaSalle, is found murdered outside the bakery, Hannah who finds his dead body behind the wheel of his delivery truck. Because the local police department is ill-equipped to handle a murder investigation, they call in Detective Mike Kingston of the Minneapolis PD to lead the investigation. As she finds Mike arrogant and because she doesn't trust him to know the ins and outs of Eden Lake in solving the murder of her friend, Hannah does some investigating of her own, while Mike does not appreciate an amateur sleuth interfering in the investigation. Hannah and Mike may have to come to a compromise and work together to find out who killed Ron.