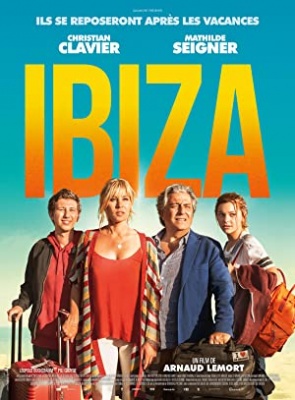 Philippe is a well-mannered older man who works as podiatrist in Paris, divorced from his first wife and involved with Carole, a fortysomething woman still bitter that her first husband left her for a younger woman. Carole's teenagers, Julien and Manon, despise Philippe, thinking he's too old for their mother, and he's trying to improve their opinion of him. After a disastrous visit to his parents' home in a remote French town, he convinces Carole to make a deal with Julien that if he passes all his high-school exams, he can choose where they have their holidays--although he's terrified that Julien will come through. Julien comes through and chooses Ibiza. Once there, trouble abounds: Carole develops a frustrating inferiority complex when Philippe turns his head time and again to watch all the pretty, sexy, younger girls; Philippe's intention to have a relaxing time crashes against an island in an eternal techno-music feasts; Manon meets Jordan at the hotel pool; and Julien chose Ibiza so he could look for former girlfriend Tara and try to get her back. Then Carole encounters Frankie, who DJs in Ibiza's well-known disco Ushaia--where Carole used to dance and Frankie used to be her lover. As time goes on, each of the four gets involved in more-bizarre, more-surreal situations--but discover that they have more in common than they thought.